FREE DELEIVERY FOR ORDERS OVER R899

Surely you have heard that THC is the cannabinoid that provides the euphoric high, and you even know about many of the medicinal benefits of CBD. But what do all of those other cannabinoids do? Read below to find a comprehensive summary of the most important cannabinoids and their properties. 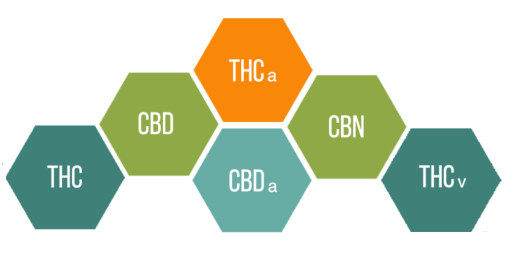 Cannabis is a complex plant containing at least 483 known chemical compounds. Out of that, at least 66 have been identified as cannabinoids, and some sources say there could be as many as 113.

Cannabis has been used for medicinal purposes for thousands of years to treat pain, spasms, asthma, sleep disorders, depression, and loss of appetite. By the beginning of the 20th century, the plant started to go out of use, as scientists struggled to understand the chemical structure of the active ingredients. In order to scientifically prove the medicinal value, the underlying mechanism must first be understood.

The cannabinoids were not discovered until the 1964, when THC was stereochemically defined and its 3D structure was finally understood. It took even longer to figure out how they interact with our bodies. In the 70’s and 80’s, it was thought that the cannabinoids were activated by getting dissolved in lipids, or fats.

Throughout the 1980’s, researchers started to realize that the potency seemed to depend highly on the 3D shape of the cannabinoid. For example, it was found that two cannabinoids with the same chemical makeup, yet different 3D structure have different effects. This suggests that the cannabinoids must bind to a specific receptor.

By 1988, the CB1 receptor was discovered and some of its properties where characterized. Since then, the CB2 receptor has been discovered, and some believe there may be a CB3 receptor.

At first, many researchers were puzzled as to why animal brains would waste the energy and resources to create receptors that only bind to cannabinoids which only seem to be naturally created in plants. This motivated scientists to try to discover compounds made within our brains that might bind to the CB1 receptors as well.

By 1993, a second cannabinoid receptor, CB2, was discovered. These receptors are located in many locations across the body, particularly in the immune system.

The endocannabinoid system allows for cells to communicate throughout the brain and the nervous system. As a result, this system can regulate inflammation, pain, sensations, memory, and mood. Also, it can help control appetite, food intake, and energy levels.

In recent years, more scientists are starting to acknowledge that regulating the endocannabinoid system can have a wide variety of uses for improving health and treating diseases. Mood and anxiety disorders, Parkinson’s and Huntington’s disease, neuropathic pain, multiple sclerosis, spinal cord injury, cancer, stroke, hypertension, glaucoma, obesity, and osteoporosis are some examples.

The system operates by having enzymes create endocannabinoids, which then bind to the cannabinoid receptors throughout the body. Activation of the receptors can regulate the flow of ions throughout cells. This could also send a signal to the enzymes to change the creation rate of the next round of endocannabinoids.

The complexity of interactions that can occur is immense, as the receptors exist in a wide variety of cell types. To make things more complicated, each species has their own unique endocannabinoid system, with different, enzymes, receptors, and endocannabinoids.

It is now theorized that the endocannabinoid system is essential for good health. Deficiencies within the system may result in disease.

Since everyone’s endocannabinoid system is wired differently, this describes why the same cannabis plant could affect different people in different ways. While cannabis is not for everyone, some people may find that supplementing their diet with the proper combination of cannabinoids may lead to a healthier lifestyle.

Below, we summarize the most common cannabinoids contained in marijuana.

Cannabinoid receptors are located in cell membranes throughout the entire body. The cannabinoid type 1 (CB1) receptors are activated by THC, anandamide, 2-AG, and other cannabinoids. Activation of this receptor gives the euphoric feeling that recreational users have enjoyed for centuries.

While CB1 receptors are primarily located on nerve cells in the brain, they also appear throughout the body and in the reproductive organs. The basal ganglia, cerebellum, and limbic system are some parts of the brain containing these receptors. They are also contained in lesser amounts throughout the spinal cord, in pituitary glands, thyroid glands, fat cells, muscle cells, liver cells, white blood cells, the digestive tract, lungs, and kidneys.

When the CB1 receptors are activated, they inhibit the release of neurotransmitters such as dopamine and serotonin. As such, they can affect our appetite, memory, pain regulation, and motor control. For example, variations in the gene that leads to CB1 receptor production has been shown to be related to obesity levels.

While there currently aren’t any other known cannabinoid receptors in humans, some speculate that more could exist.

FREE DELIVERY FOR ORDERS OVER R 899